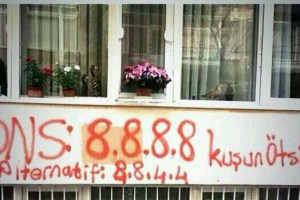 Last Friday Turkey's Prime Minister Recep Tayyip Erdoğan made headlines when he blocked access to Twitter due to apparent widespread dissemination of high-level corruption evidence. The people of Turkey were able to navigate around these blocks by using Google's alternate domain name server (DNS) service. But it appears that this tactic won't work much longer.

The original block was a DNS direct - people attempting to access "twitter.com" would be redirected elsewhere, the request was not resolving that language-based request to Twitter's numerical IP address.

This is where Google's Public DNS service came into play, it provided an alternative way of reaching twitter. You may have seen in the news "DNS:8.8.8.8" spray painted throughout Turkey on everything from bus stops to apartment buildings. This is the public DNS server address that the people of Turkey could use to get around the block. This resulted in a 138% increase in Twitter use in Turkey, not what the PM Recep was trying to accomplish.

On Saturday, it was reported that the government had blocked access to the Google DNS service itself. There is also a block at the IP address level.

Now Turkish Twitter users are having to get rather tech savy to access the social media site. They can use Twitter's SMS service, which the company suggested using last week, they can play with host files, use a VPN, or use the anonymous network Tor which seems to be a popular option.

Whatever path they take, the people of Turkey won't be silenced and this censorship by Erdoğan will continue to keep Turkey and his dictatorship center stage.